Sailing with a bunch of crazy Czech people on an Italian hippie-boat is quite an experience. ”Interesting”, as Julius Ceasar would say. Being the only non-Czech crew member on board, I was not so sure what to expect from this trip. It seemed a little contradictory: Czech and Sailing. On which sea did they learn that exactly? And do they realise that traffic rules can be of real importance here?

But as soon as we left the port of Preveza I discovered that the Czechs feel very comfortable and responsible on the water. It is not just a coincidence that the nautical greeting ”Ahoj” is one of the most commonly used Czech words to say hello. As a country of many rivers they have quite some experience of moving on water. And thus after some smooth manoeuvring through the Lefkas channel, the four beautiful red sails of La Bum were opened one by one, with Czech enthusiasm and professional care. 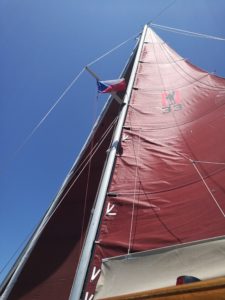 Before the sails could be opened the Czech flag had to be raised of course. Which seemed to be a big thing (also the flag itself, quite big. ..), including some singing of the national anthem. Such a small nation, yet so proud of their culture. The few times we met some other Czech people on the water, the happiness of recognition could not be bigger: ”Ahoj!!! Jak se mate?!! Dobry! Hezky! Krasny!” It is really a cuty crazy language to listen to.

While moving south slowly, from Meganisi to Ithaka and from Ithaka to Kefalonia, I started to feel more comfortable with these Czech sailors. They really have some good habits that I can get used to. For example, they always make sure there is some beer in the fridge (and some stronger drinks of course, beer is just for when you’re thirsty). Although I do not feel the need to drink it right after breakfast, it was great to have a tasty cold Mythos when arriving in one of the incredibly “krasny” bay of Assos (Kefalonia) or Lagana beach (Zakinthos).

During the last two days the Czechs proved themselves to be very tough as well. While sailing around Zakinthos and crossing the sea back to the mainland, the wind started to increase up to 20 knots, and waves achieved heights of 1 meter. La Bum was moving forward like a rollercoaster and the salty water was washing the deck. But no one was complaining. Only life jackets, a reefed main sail, and excited smiling faces were visible. The safe arrival to Killini had to be celebrated with some strong Metaxa, of course.

So okay, Czech people can sail. And their black sense of humour, mostly used to make fun of themselves, is actually also quite enjoyable. Sailing on a hippie-boat, raising the Czech flag, singing the national anthem, drinking beer instead of coffee, and screaming ahoj with proud while dominating the Ionian waves professionally. We should not take life too seriously, but enjoy it like the Czechs do. Ahoj!