Finally, after many months of work the time for thorough sailing test has come! From our original plan to stay out for 8 days we ended with 3 days, but it was still a great adventure.

Just after the traditional Barcolana regatta had ended we loaded the boat with supplies and prepared ourselves to go out. Only one little problem remained – for next two days there was predicted Bora of 20-30 kts with gusts up to 40. We realized we wouldn’t be able to exit marina in Trieste, as the lanes are very narrow there and shape of our hull makes the maneuvering in strong wind very difficult, so we waited until the afternoon of Tuesday 11/10, when the wind came down to 16 kts.

We happily departed with farewell from Graham and Michelle, our NZ friends, who came for Barcolana. We raised the sail and aimed towards Croatia.

After an hour the wind reduced, so we dared to open the main sail. But as usually, in few moments strong gusts forced us to remove it again.

As it was getting late, we decided to stay for night in Izola. We started the engine to be prepared for taking down the sail and waited few more minutes to get in shelter. Suddenly, I heard the beep of ignition. “Shit, the engine stopped.” I yelled to Luigi, who was struggling with some ropes.

He went down to the pilot house to see what happened. I heard him trying to restart – few beeps and starter, but the engine didn’t start running. We were under sail beaten by 20 knots on broad reach, me on outside helm and Luigi deep down in engine trying to understand what went wrong. “Probably some air got into the fuel pipe as we were heeled.” he told me later. Because we wanted the mechanic to take a look (before we would do the repair ourselves), we anchored off the marina entrance and called an EmergenSea to tug us in.

Mechanics arrived the next morning and discovered that it had been some air that had went from fuel tank to the pipes. By turning few screws on fuel pump they removed the air and our engine started again. We had seen that there was still quite a lot of fuel in the starboard tank, so we couldn’t understand why the problem occurred. We have realized only few days later, when we found that the gauges showing the level of fuel were crossed (left for right and vice versa) and therefore we had wrong assumption.

How such a small detail can lead to a potentially dangerous situation. Lesson learned.

We topped up the fuel to be 100% sure and left the marina. However, 100 meters from the marina entrance, almost at the same spot like yesterday, the engine stopped again. This time we knew what to do, so we dropped the anchor and removed the air, which obviously got left in the fuel pipes from morning (when mechanics opened the circuit). We took lunch, enjoyed a bit of sun (22,5°C outside!) and then sailed along the coast to Croatia on a beautiful light breeze.

We arrived to Umag, Croatian port of entry, around 17 o’clock, made customs entry and then went to recommended marina restaurant to enjoy some Croatian specialties. After the dinner we took a walk through abandoned town and found that out of season there is no life at all.

The next day we noticed bad weather coming from west, so we went downtown to take a coffee and set back to the north, to Trieste. Most of the way we did sailing, as we had a favourable SE breeze. 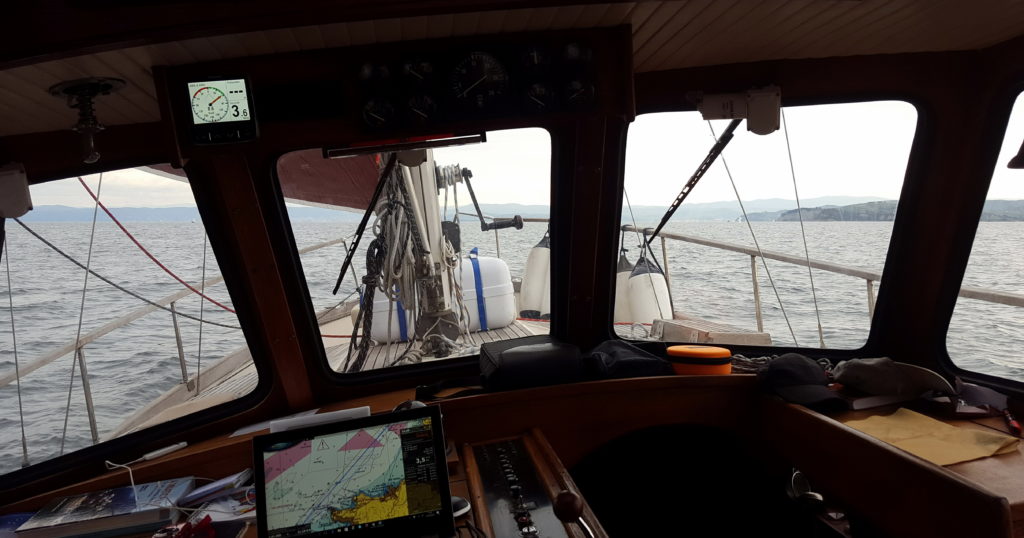 Only at the very end, few miles from Trieste, we were struck by the edge of storm. Wind shifted 180° and increased to 20 knots. Luigi was taking rest at that moment, and I was quite lucky to see the wind coming on the sea, and I reduced the sails right on time. 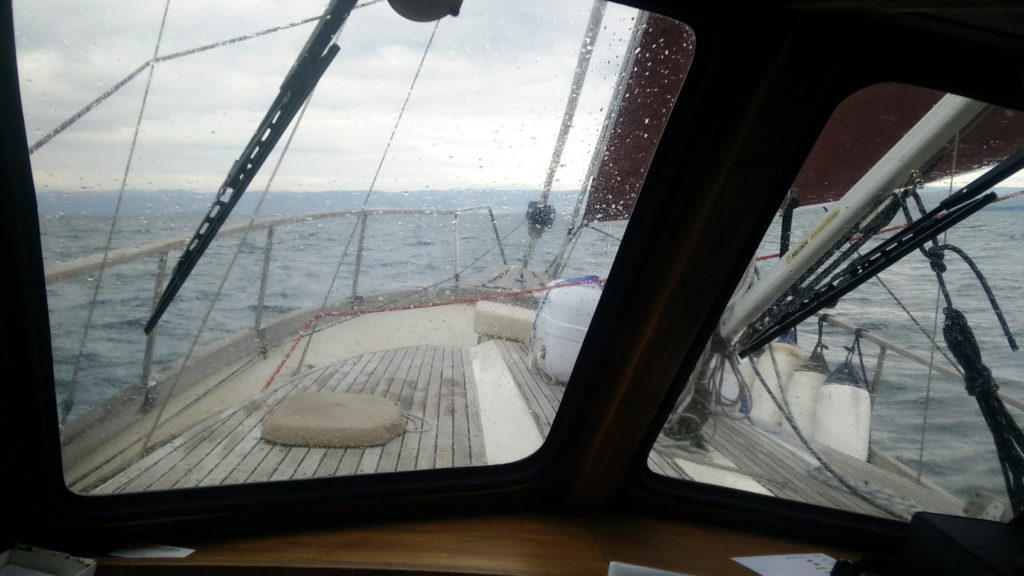 But as soon as we entered Trieste, wind died to zero. We moored without trouble in La Bum’s home marina (LNI Trieste) and celebrated successful arrival.

To sum up:
Every day was completely different. We enjoyed both good and bad winds, both sunny and cloudy, cold and warm, both quiet and dramatic moments. We had good food, good wine, good beer, only our beautiful companions were missing. But we have tested the boat and collected some valuable experience to be ready for the next season and many new adventures!